Posted on November 6, 2017 by MrsFSquared

This post title is potentially slightly misleading: I have no freaking clue how to handle two under twos. Please note the question mark. If you do know any two under two magical tricks or spells – please feel free to share! The title of the this post should really read “how to attempt to survive two under twos” by someone a mere month in.

I remember skim reading a post on the same topic when I was in the mid-stage of pregnancy; i.e. I knew I may be getting into some hot water with two little people to look after, and I wanted to understand more specifically if it was tepid hot, hot hot or freaking boilymcboilerson.  The post was written from both the perspective of the new mother of two, and the new father of two, and to say it was slightly terrifying is an understatement. I have clearly blocked it from my memory now as I can’t recall the specific details, but they were both “au fond du seau” as they say in France – literally at the bottom of the bucket, or more accurately in a pit of despair. They each resented the other. Suffice it to say the boily hot water option was portrayed as being most accurate.

Determined not to let that shocking read get me down, I approached this new phase of life mindful of that old adage “this too shall pass“.  Yes it will be hard, intense, taxing… but it will last such a short period of time, it will be over before we know it. We will be looking back at it and (hopefully) laughing, crying at how quickly les petites change, and generally being delighted that we got to where we are today.  Considering we truly believed we would not have our own children (we even went to an initial adoption meeting) how magical and insane that we are here now with two little people we can call our own.

Two babies is hard. We knew this would be the case. We knew there would be adaptation period and we are very much still in that period. So how are we coping so far?  Here’s the truth, and the reasons why:

Number 1 : Monsieur FF. We literally could not function without him right now. Everyone needs a partner just like him (for the avoidance of doubt he’s not up for grabs, sossles, but he could happily offer up some tips to fellow malians over a beer).  The man has just survived 9++ months with a grumpy, super-sized wifeball of hormones; he is then accosted with the broken version of that wife ball, still with a John Wayne waddle, plus an additional, smaller wailing ball of hormones. This is to accompany the existing Boddler who incidentally is rapidly approaching terrible twos with a vengeance. I’m not saying we should feel sorry for him: let’s be honest he brought this on himself, and he also got off pretty lightly in the grand scheme of things (quick reminder that it was the wifeball that carried and birthed the bebette). However, credit where credit is due, Monsieur FF is going above and beyond on father and hubber duties right now. Cooking and cleaning and generally keeping the Boddler in a happy place whilst maman is losing her sh*t silently in the room next door.  You are a legend Monsieur FF.  As I keep saying to him, this time will pass and we will look back and laugh. Meanwhile, just enjoy the craziness that is our life right now. And try to shower. In that five second window you have to yourself.  That is more important than researching holidays…. (Anyone that knows him will appreciate this man does. not. stop).

Still loving this – winning on every level

Bebette not willing to partake but Papa is completely on it

Also just a quick sidenote that I can’t put into words how much I take my hat off to those single parents out there that are parenting solo: epic levels of kudos to you.

Number 2: Boddler is in nursery. That’s right, I’m basically cheating. I am not really caring for two under twos at all. I’m caring for just one most of the day.  That said, the hours where we are doubling up are intense.  I’m still only a month in so things will change in the next weeks, but so far Boddler has continued in his usual routine at nursery with some surprise visits and treat days out interspersed.  This is working really well for everyone as it means he continues in his routine and isn’t too discombobulated by all the changes going on at home. It means we know he is properly watered and fed so that if we end up having a crazy soiree of screaming madness (there have been a couple) and I can only prepare cereal and cheese for dinner, he’s not going to starve.  If I’m beyond tired and have Bebette attached to my boob, it’s ok that we just read some stories with raisins, because I know he’s had a good day of energy releasing at nursery.  And when Papa gets home, we do our best to both have some time where we are completely focused on the Boddler. Nowadays bath time and story time are particularly raucous.

Number 3: Books are your friend.  Luckily the arrival of Bebette has coincided with a deep and intense love of reading for Boddler. By that I mean when he goes to bed, he needs at least three books in his bed with him.  And he needs the light on so he can work through each of the books, silently studying the images (I assume he’s not studying the words but wouldn’t be surprised obvs #childgenius).  That is after we have read the stories to him.  Whenever he gets a bit distressed, because Bebette is getting in the way of him having a cuddle with mummy, or he starts to throw things in my direction with a menacing look in his eye, I simply offer up a story and off he poddles to fetch the relevant story and plops himself down so we can get on with reading.

Number 4: Building bricks are your friend. Ok, I work at LEGO so I’m slightly biased towards DUPLO bricks. Seriously though one box of the fantastic plastic is good for a LOT of play.  Boddler FF can happily sit for tens of minutes building towers, trains, farms, “colicoptas”, and generally having fun creating and ensuring the bricks are in some sort of colour order.  It’s quite mesmerising to watch.  The only negative (aside from the damage to feet when you inadvertently stand on the stuff) is the noise – if I’ve managed to get Bebette to nap somewhere that’s not on me (hard, but not impossible), then you can rest assured that the sound of Boddler tipping his bricks all over the floor and then throwing himself into them will wake her up.  I recommend parental assistance in preparing the bricks for play and tidying up afterwards.

Number 5: Snacks are your BEST friend.  The first night I went to pick up Boddler on my own with the Bebette in tow (in the soft sling which was an error; not robust enough for Boddler-catching movements – recommend the BabyBjorn) I was reminded of the critical importance of having a snack handy at all times for bribing. Bribery goes against everything that I am, except in these circumstances.  I needed to get Boddler into the buggy and I needed not to tip Bebbette onto the floor, or give either of them concussion with a head clashing incident. The way to do this? Offer up a snack. Boddler leaps into the buggy and practically straps himself in, panting for his carrot crisp or handful of raisins.  Not entirely strapped in of course, and again, being completely honest I cheated in this specific case  because a fellow kind mama saw me flapping with Bebette dangling out of my coat, and rescued me, ensuring Boddler was properly and safely strapped in.  But I’ve since mastered the art and can also casually push the buggy with one hand whilst ensuring Bebette is fine with the other #winning.  I confess that there are certain things which were not available in abundance before, which now may be more frequently consumed due to arm’s length availability. For example, chocolate or “lolott” as some people call it. For some reason* there is usually some chocolate or cake or a biscuit near me at the moment (in the voice of Ali G it wasn’t me)

Who ate all the chocolate?

Number 6: Slings. Baby carriers. Pouches. Anything to facilitate baby carrying.  One thing you need more than anything with 2+ children is your hands free. There is no time for being trapped on the sofa with a babe in your arms.  I mean it does still happen, and is indeed necessary sometimes (have.a.rest), but if you have to do something with the older one at any point, like prepare food or get them dressed, which is required most day, and your new baby is still fussy and doesn’t like to be put down much (or at all… not mentioning any names…) then you really need to carry the baby in order to function. It means you can do things like get the big one into the buggy.  It also means, at least for the time being, you don’t need to have a double buggy.  Baby carrying is proven to have all sorts of positive effects for you and your babe.

There is a Bebette in here 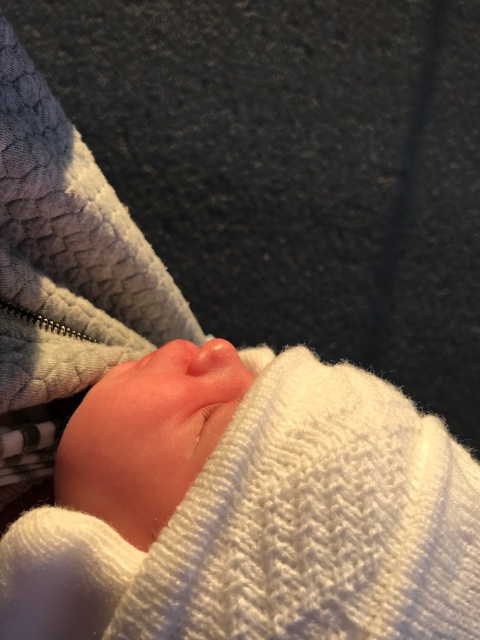 Number 7: Sleep and Eat.  Just whenever you can.  Ok, none of this “sleep when they sleep” anymore – that simply doesn’t work when you’ve got two under twos. Boddler is going to wake up at 7am, or before, whether you like it or not. Bebette is going to need feeding at random intervals throughout the day and night, and will get colicky in the evening.  You need fresh air, coffee and food in your cupboards so – frankly – there isn’t really much opportunity for napping. You have just got to power through and go to bed when the little one lets you.  Ensure you eat because aint nobody got time for a hangry mama.

Number 8: Support network.  Second time round you won’t have you NCT group or equivalent.  I mean you hopefully still have your crew, I certainly do (check out my post on their awesomeness here), but we are first to ’embark’ on the second pregnancy in our group, and so it’s a bit different to the first time when we were all popping at the same time. Most of my crew are happily sleeping through the night and are well beyond worrying about breastfeeding and colic.  However, they are still as supportive as ever.  I’m also lucky enough to have a group of friends who have recently had number twos (lols – I mean babies).  Late night whatsapping, in-between crazed amazon priming, helps to maintain my sanity.  All you ladies rock.

Number 9: Don’t judge yourself.  Don’t forget these babes won’t remember any of this madness. You and your partner will, but even those memories will quickly fade.  Enjoy each day, and be grateful.  If you feel really, really stressed, watch an episode of one of the shows where someone is managing multiples e.g. these quintuplets.  That will quickly remind you that you can totes manage this.

Big love and lots of luck to you x x