You may remember that last September, aka a lifetime ago, we went on a long haul voyage with Bebe FF (aged 7 months) to Mexico. It is fair to say we were somewhat apprehensive about the trip, navigating the journey, the heat, the bottle sterilisation… but it went swimmingly (literally 70% of the time spent in water) and we came away thinking “we should do this more often!”. Of course we didn’t because we are not made of money, but it gave us the confidence to book another long haul holiday; we were feeling empowered. We are parents and we can continue to travel!

Being in the very fortunate position of having our own Lone Star State family that were long due a visit, we decided we could do Texas. “Do Texas” we did… but boy was it a different experience with a boddler!

Challenge un: finding out you are pregnant with Bebe #2 shortly after booking. Que?!! I will blogulate separately about the mind-blowingness of falling pregnant after a long journey of fertility drama, and when your first bébé is still… well, a bebe. For the purposes of this blog, you just need to imagine a tired, bloaty, nauseous, shocked Mama FF, at that stage of pregnancy where you are incapable of thinking beyond the end of the day, let alone for a 2+ week tour of the great Lone Star State. I would just like to sidenote that I was particularly looking forward to some giant margarita action with my Texas crew, which naturally had to be sidelined….*liver sighs in relief* …. I did however manage to maximise all my food dreams including eating TexMex for approximately 10 days straight and ordering multiple sides and additions “for the Bebe” (either the one on the outside or on the inside, and in any case all ending up in my belly: #win). Our Texas family started and ended our trip with Papasitos and we are still dribbling thinking about it.  SO GOOD.

Le surprise bump and Bebe FF trying to balance up there 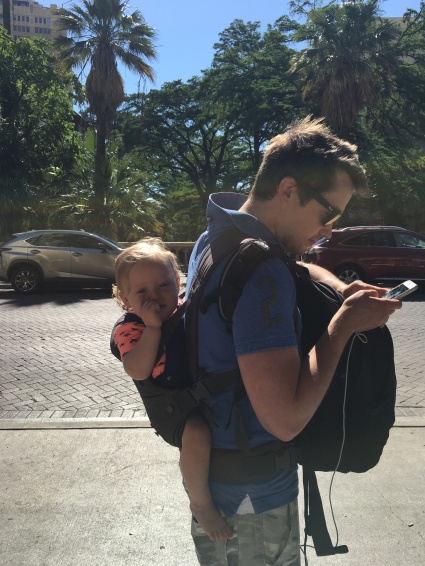 same same but different (less nausea in this case)

Challenge deux: getting ourselves and our shizzle to the airport. You may be masterful at packing but I challenge you to pack effectively for yourself and a boddler when you are tired, fat, and from a country that is notoriously rainy going to a country where it’s insanely hot.    Turns out I’m truly terrible at packing expandable, hot, decent clothes and also not so great at packing for my Bebe. Mr FF did a pretty strong job on his side, but he hasn’t doubled in size and his wardrobe choices are approximately 0.3 of mine. For Bebe FF, even though he’s little, he needs a lot of paraphernalia and you kind of think the more of his own stuff you bring, somehow the more familiar it will seem and, therefore, he *will* be happy. Yes we need to take his cups, and bedding, and towel, and those 3 extra large teddies he once played with, 15,000 long sleeve tops (air conditioning is cold!) and every variety of Ella’s pouches *just in case*…. So all of this to say we basically had a shed load of stuff. We also have the actual Bebe.  Bebe FF is now getting big for carrying on me, and I also have a growing barrier to front carrying, aka Bebe #2, so we for sure needed the Babyzen yoyo (best thing ever). I’m also not enormously helpful as a bag carrier nowadays, so whatever we took, Mr FF essentially had to single-handedly get it from A to B and then to TX.

We decided on the basis of the  simple drama of packing that we would need to get to the airport in the car, and in that case we might as well just get a hotel by the airport the night before to give us some leeway before travelling. It was an excellent (and very grown up) plan (Mr FF gets full cred for that) and meant we had some sleep before our morning flight. Mr FF also got to enjoy loading and unloading the baggage a few extra times… trooper. Naturally Bebe FF was keen to show us what joy lay in store so decided he probably wouldn’t sleep in the hotel bed and would instead make loud banging noises throughout the evening. So “some sleep” is an accurate description, not all the sleep.

Challenge trois: flying. I’m one of those people that doesn’t look forward to stuff until it’s pretty much happening. For holidays, I only get excited when I’m actually on the plane. However, that experience has recently changed. Once on the plane I suddenly realise the scale of the potential unknown that lies ahead… perhaps it’s the look of fear in people’s eyes as they glance in my direction, just at the moment Bébé FF loudly catapults out of my lap and onto the floor in a cloud of snot and food particles. Ten hours with that little monstre?! TEN HOURS. Even for a “normal” human being that’s a long time to sit relatively still. But we don’t have time to think about ourselves: Bebe FF doesn’t do sitting. He actually doesn’t do any one single thing for any extended period of time. He has recently realised that sitting still is for statues, and actually the best way to use every ounce of energy is to wriggle endlessly around, up and down, shaking his head whilst simultaneously making loud noises and – if possible – also pointing his finger. If you’re lucky he also throws in a slap.

The only distraction that is even remotely effective is food. The prospect of feeding him non-stop for 10 hours did occur to us and we ensured that one of the 17 carry-on bags we had was stuffed with copious amounts of relatively odourless and colourless “food”. Probably the best tip in this whole blog is the following: take Rice Krispies and other small cereal with you to travel. Take plenty. Fill little pots and even toys with the things. Watch with joy as your little one puts all their concentration into picking up a single one of those beauties and remind yourself there are 27,459 to go. There’s no stickiness or staining and they eventually just melt away, they aren’t bad for Bebe and shouldn’t hurt his teeth or belly. Voilà. Those ten hours quickly disappear into… erm eight. Ahem. Another important tip is get the bassinet friendly seats at the front. Get them, whatever you have to do. I wasn’t sure if Bebe FF would even fit in the seat still, but he did (didn’t look very comfortable but he was secured at least and not trying to squish Bebe #2) and he managed to nod off a couple of times much to our delight. Four more hours gone! The only annoying thing was when there was turbulence we had to get him out and back onto the lap – mildly traumatic when you’ve just spent the best part of an hour encouraging him to sleep.

Anyway, all in all, the combo of snippets of sleep and Rice Krispies saw us through and we got off the plane with smiling fellow travellers, including a grandmother who was fully prepared to take Bebe FF away with her, after he graced her with numerous cuddles and dribble-kisses.  This was in slight contrast to the return, where we were slightly less popular with the chaps who had opted for beds for the night flight, Bébé FF having missed the critical indication it was a “night” flight… 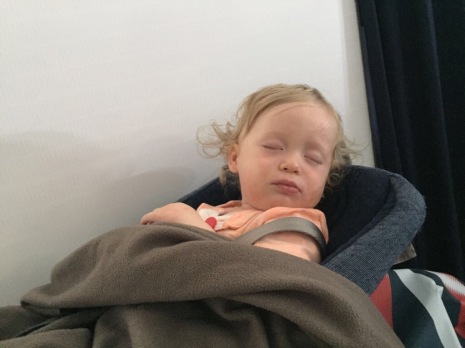 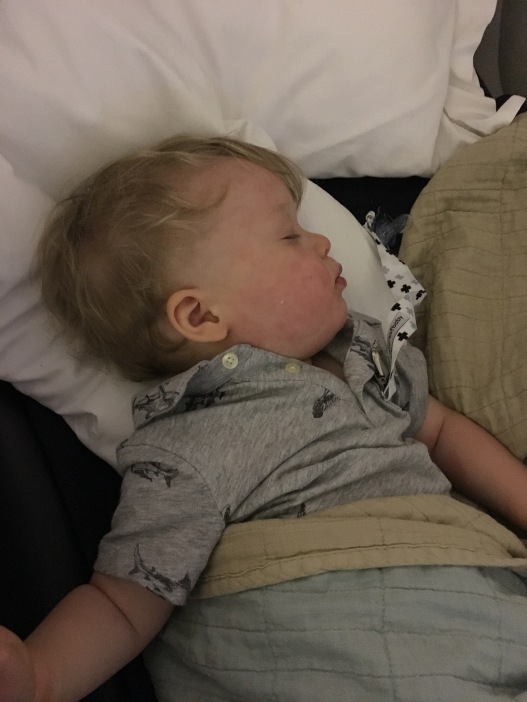 Challenge quatre: Getting three.5 tired bodies into a car and somewhere safe in Texas. We are going to a place where the roads are quadruple normal European size. They say everything is bigger in Texas, they are right.  So as relatively average-sized Europeans (pretend I’m not pregnant for a moment and ignore Brexit), the natural choice for a vehicle is the Suburban.  You can fit about 20 Europeans in there, plus the 95 bags that we have, with enough space for a couple of giant US portion drinks.  Mr FF was delighted with his monster truck.  Bebe FF immediately snuggled into his car seat of joy (which by the end resembled a giant Rice Krispie) with endless space to kick and throw water. After a few difficult discussions with the Sat Nav, which was in fact a human person kindly trying to provide directions, we were off towards Houston, our Texas friends, and a place where the sun shines and we, for a short while, don’t have to worry about the dramas left back home and can simply observe the drama around us.

Well, I haven’t even got into the juicy stuff yet: you will have to wait for the next instalment…. Bises x